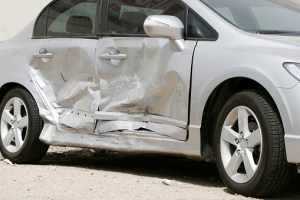 A broadside collision, also called a T-bone or side-impact collision, occurs when the front end of one vehicle crashes into the side of another vehicle. The crashes often occur at intersections, but they can also occur in multiple-vehicle crashes.

Some of the causes of T-bone collisions include negligent driving behaviors such as:

Injuries that can occur in a broadside or T-bone crash

Due to the lack of crumple zones between the passenger and the striking vehicle, the body receives far more of the force of the crash, making broadside or side-impact crashes the cause of the second highest number of traffic fatalities after head-on collisions.

Some of the injuries that can occur from a broadside crash include:

Because broadside crashes account for about 25% of traffic fatalities in the U.S., auto manufacturers have been making a strong effort to improve vehicle side protection by installing side airbags, which help protect the passenger’s body by distributing the impact forces of the crash over a larger portion of their body. The IIHS began testing side-impact protections in passenger vehicles in 2003 using tests that were more rigorous than the government’s test for side crashes. They use a crash test dummy with the stature of a smaller woman or a teen driver, and they use a barrier with the dimensions of a SUV, which would help assess what might happen in a real-world crash. Since the IIHS began testing side-impact protection in 2003, a lot has changed in the manufacture of passenger vehicles. Side-airbags are now standard in most passenger vehicles and passenger compartments are built stronger largely because of the Institute’s rigorous testing and ratings criteria.

If you have suffered a serious injury in a broadside traffic accident, you may have some questions for an experienced Maryland car accident lawyer.

Plaxen Adler Muncy, P.A. is a premier personal injury law firm serving Maryland clients injured in car accidents. We invite you to call 410-730-7737 or fill out our contact form to schedule a free initial consultation now to learn more about our legal services. Our experienced car accident attorneys are here to help you recover the compensation you need.