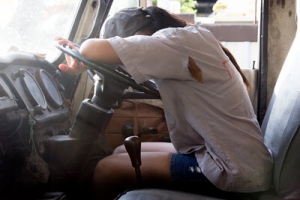 In March 2018, the driver of a Family Dollar store tractor-trailer fell asleep and crashed his rig into a tanker truck, resulting in a serious fire that almost took the driver’s life. The big-rig driver barely escaped, but suffered some injuries. The tanker truck driver was not injured. However, not all incidents involving drowsy driving end with this fortunate of an outcome.

Each year in the United States, 6000 car accidents resulting in fatalities are due to fatigued drivers – according to the Center for Disease Control and Prevention (CDC). More than 44,000 people were injured in some 72,000 crashes in 2013 alone. The problem of drowsy driving has become a national concern and many believe the problem is more pervasive than the statistics indicate.

Who is falling asleep at the wheel?

Persons who are most at risk for succumbing to the dangerous activity of drowsy driving include:

Although the individuals described above are highly susceptible to driving while fatigued, this malady can affect anyone.

The condition of drowsy driving and drunk driving carry a number of similarities in terms of the effects on the body. According to the National Sleep Foundation, drinking alcohol and sleep deprivation produce similar dangerous consequences. For instance, the researchers indicate that a person who does not sleep for 24 hours straight has similar driving impairments as an individual with a .10 blood alcohol concentration (BAC).

Drowsy driving and alcohol impaired driving can lead to the following:

The growing problem of trucker fatigue

Truck drivers are especially susceptible to drowsy driving. Often they drive for dozens of hours with minimal sleep. The Sleep Help Institute reports that driver fatigue is responsible for approximately 13 percent of all crashes involving large trucks. As well, 7 percent of truck drivers admitted to falling asleep while driving. The Institute found the following information:

If you have suffered an injury due in a car or truck accident and we suspect the cause is due to fatigued driving on the part of another driver, the Maryland truck accident lawyers at Plaxen & Adler, P.A. are here to help. We can fight on your behalf to help you secure the compensation you are owed. To arrange a free consultation, call us today at 410-730-7737 or fill out our contact form.