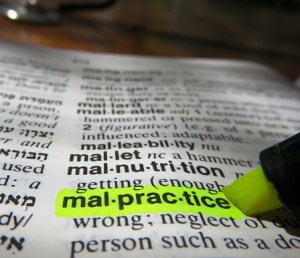 A new study out of the New England Journal of Medicine has spawned a lively debate in the medical field. Five researchers analyzed more than 66,000 paid claims of medical malpractice between 2005 and 2014. They discovered that 32% of those claims were paid by 1% of the physicians named, leading them to conclude that “a small number of physicians with distinctive characteristics accounted for a disproportionately large number of paid malpractice claims.”

The reaction by doctors around the country was swift. Dr. Steven J. Stack, president of the American Medical Association, said in one interview that “Once again a study of medical liability claims has based unreliable conclusions on information obtained from the inherently flawed National Practitioner Data Bank.” Dr. David M. Studdert, the lead author of the study, pointed out that the NPDB is the most comprehensive source anyone has access to, and that his team’s research stands despite any “limitations” the databank has.

One prevailing problem with the NPDB is “that reports collected by the data bank were often untimely, inaccurate, or duplicated, which made it appear that ‘twice the number of disciplinary actions against a practitioner had been taken,’” according to an investigation by the Government Accountability Office. The second problem is that there is no way of determining whether or not claims were being underreported to the databank, despite the law which requires all “adverse events” to be reported, a topic we have covered before.

What the study revealed

While these statements must be considered, the numbers turned up by the researchers are too impressive to ignore. Out of the 54,099 physicians with paid claims (97% of which were the result of a settlements; only 3% went to a trial verdict):

When choosing a doctor, it is vitally important that you do your research. The NPDB may have its limits, but it is the only comprehensive tool most healthcare consumers have. If you believe you may have been treated by a negligent doctor, which led you to sustaining further injury, we invite you to contact Plaxen & Adler, P.A. to reserve a consultation with a skilled Maryland medical malpractice attorney.