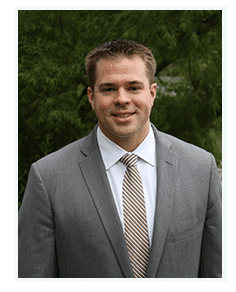 Plaxen Adler Muncy, P.A. is proud to announce that David A. Muncy has been selected for inclusion in Super Lawyers’ list of Maryland Rising Stars for 2017. This is a great honor, though we are not surprised that David was chosen: time and time again, he has proven to be a dedicated and aggressive advocate on behalf of his clients, and a real leader in the legal community.

Every year, Super Lawyers reviews thousands of nominations from attorneys all over the country, and they eventually name fewer than 5% in each state to their list. Rising Stars only recognizes half of that amount. In order to be eligible, an attorney must be no older than 40, or must be in practice for no more than 10 years. Candidates for Rising Stars are reviewed using the same standards of peer recognition used to determine the members of the Super Lawyers list.

Since joining our firm in 2012, David has made great strides towards helping injury victims and others throughout Maryland. He has helped research and draft bills that have gone before the Maryland General Assembly. Earlier this year, David was named to the Board of Governors for the Maryland Association of Justice, after being honored for his leadership of the New Lawyers Section of the MAJ, which was named Section of the Year by the organization. Most importantly though, is the work he puts in to get the best results for his clients. David has handled hundreds of hearings and trials in his career and works extremely hard to make sure his clients get the justice they deserve.

All of us at Plaxen Adler Muncy, P.A. are very proud of David’s selection to the 2017 Rising Stars list. His unwavering support for his clients, his commitment to high ethical standards, and his tireless work on behalf of the civil justice system are all part of what makes him such an integral part of our firm.

Congratulations on your selection, David. The honor is certainly well deserved.

Posted in News, Our Firm