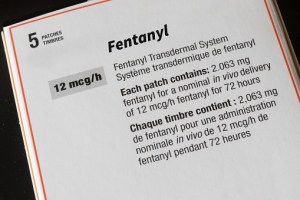 In May, an Ohio police officer named Chris Green responded to a traffic stop for a possible drug sale. He searched the car after discovering white powder on the seats and on the suspects themselves. Green wore gloves and a mask during the search. When he returned to the station, Green realized he had some powder on his shirt, and absentmindedly brushed it off, the way you might brush off a piece of lint. An hour later, Green was rushed to a local hospital for an overdose. Between the station and the hospital, he was given four doses of Narcan in order to save his life.

That white powder Chris Green brushed off of his shoulder was fentanyl, a synthetic opioid drug described as being between 50 and 100 times stronger than morphine. Fentanyl, like all opioids, is highly addictive and potentially deadly: according to the National Institute on Drug Abuse, as little as two milligrams could be a fatal dose, “and emergency personnel who touch or breathe it may even be put in danger,” as evidenced by Green’s unintended overdose. 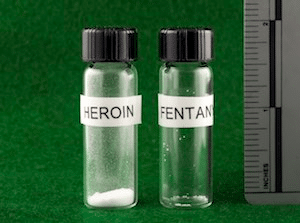 (photo credit to the National Institute of Drug Abuse)

Our country is currently in the grips of an opioid abuse epidemic, and fentanyl is helping to drive the number of fatalities ever upward. It is outpacing heroin as the leading cause of drug-related deaths in New Hampshire, Long Island and Massachusetts – Florida has already declared it the leading cause of drug-related death – as well as in Canada.

Know the signs of a fentanyl overdose

Because of its potency, anyone who uses fentanyl could be at risk of a fatal dosage – even if they are using a prescribed amount. DrugAbuse.com lists the following as signs of a fentanyl overdose:

If you have a prescription for a fentanyl patch, or if you are with someone who you believe may have overdosed on fentanyl or any drug, you should immediately call 9-1-1. How quickly emergency responders can administer a dose of Narcan could be the difference between life or death.

Our legislators are hard at work to putting an end to opioid abuse in Maryland. You can read more about proposed treatment plans and law enforcement efforts. If you or someone you know would like treatment for your addiction, there are multiple detox and treatment centers located throughout the state. You can access a partial list here to choose the right program for your needs.

Plaxen Adler Muncy, P.A. is a premier medical malpractice and personal injury law firm serving clients throughout Maryland. For more than 35 years, we have fought for justice on behalf of those who were harmed by the negligence of others. To learn more about our services, or to schedule a free initial consultation with an experienced Baltimore medical malpractice lawyer, please call 410-730-7737, or fill out our contact form.