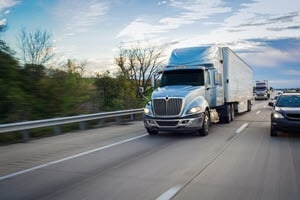 We’ve been hearing a lot about self-driving, or autonomous, cars lately. Experts tell us that in the near future we’ll be zipping around the streets in driverless cars, with the promise of safer highways, less traffic, and a drop in car accidents. It seems the future is closer than we thought.

It’s not just the auto industry, however, experimenting with autonomous vehicles. The trucking industry is also exploring these new technologies. As companies seek to increase profit margins, reduce fuel consumption, increase freight capacity, and cut down on truck accidents, they’re looking to autonomous technology for their fleets. One of these techniques currently being tested is called platooning.

What is platooning, exactly?

Truck platooning is actually semi-autonomous, meaning there is a driver involved. With platooning, two or more trucks are digitally linked in a convoy formation, using wireless communications like GPS and sensor technologies to communicate. The vehicles aren’t driving themselves, but they are communicating with each other without human assistance. After the trucks are electronically linked up, they are able to do things like accelerate and brake as a unit. This allows them to travel together as a convoy, or platoon, almost like a train, but without the tracks.

Think of the lead truck and truck driver as the engine and conductor, leading the line. The driver accelerates, brakes, and reacts to upcoming traffic for the rest of the line. When the lead truck brakes or speeds up, the electronically linked trucks behind it automatically does the same. There are drivers in each truck, however, who must still steer and monitor their vehicles.

As of early 2018, nine states have regulations allowing platooning, but Maryland has not yet passed any legislation regarding the trucking technology.

The pros of truck platooning

If you ever see a truck platoon on the highway, it appears as a line of trucks closely tailgating each other. However, this is for a specific reason. The trucks behind the lead truck take advantage of the slipstream created by the lead truck to reduce drag, and therefore increase fuel efficiency. Additionally, if a car happens to slip in between trucks, the platooning technology allows for that and gives the car space until it eventually leaves the lane, then the trucks will close up the space again.

An end goal of platooning is that it could allow drivers in the back of the line to rest while the front driver takes control. This could cut down on accidents caused by fatigued truck drivers. The ability to move several trucks’ worth of freight with drivers sleeping in shifts could lead to huge increases in freight efficiency and cost savings.

The cons of truck platooning

Of course, platooning also has its potential drawbacks. Some truck drivers have expressed concern about being in the rear trucks, wondering what might happen if the lead truck makes a sudden or unexpected stop. There are also worries about what happens if cargo falls off any of the trucks in the convoy. And, with that many heavy, massive tractor-trailers on the road together, the consequences of a multi-vehicle accident could be catastrophic.

When you or a loved one are injured in a truck accident, the Maryland attorneys at Plaxen Adler Muncy, P.A. are ready to help. We will take on the trucking companies and fight for your right to compensation. To learn more, or to schedule a free consultation, please call 410-730-7737 or fill out our contact form.