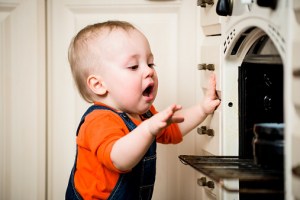 Benihana is a popular hibachi chain restaurant; we have one in Baltimore and one in Bethesda, and there are more all over the country. In April of 2015, the actress Tori Spelling was at a Benihana with her family when she slipped and fell onto the grill. A recent news report by ABC Radio says that Spelling is going to sue the chain, having allegedly “’sustained deep second- and third-degree burn injuries requiring hospitalization and surgery,’ leading to wage loss, hospital and medical expenses, general damage and ‘loss of earning capacity.’” The news of the lawsuit follows on the tail of a New Jersey woman being awarded more than half a million dollars after tipping over a piece of exposed rebar at a local Dunkin’ Donuts, and “burning herself with coffee and getting back and shoulder injuries that required surgery,” according to CNBC.

The case out of New Jersey has seen a lot of comparison to the Stella Liebeck case from 1992. But in all three of these claims, a person suffered serious burns because of the negligence (or alleged negligence, as Spelling’s case has not yet moved forward) of another person. Burn injuries are among the most painful there are, and the consequences of a serious burn can last a lifetime.

The truth about Stella Liebeck

In 1992, Ms. Liebeck bought a cup of coffee from McDonald’s. The coffee was hot, she sued and she was awarded $2.9 million – or so the story goes. The public and the media were quick to judge Ms. Liebeck, claiming that her lawsuit was frivolous. She became a poster child for “tort reform,” and the outcry against her was terrible.

But the truth is far worse than was misrepresented in the news. The Retro Report explains that the jurors in Ms. Liebeck’s case “learned that she was burned over 16% of her body, and had third degree burns on her groin. They also learned that McDonald’s had received nearly 700 complaints about hot coffee burns in the almost 10 years before Stella’s trial” – information that never made it to the news. The coffee that Ms. Liebeck spilled was 180 degrees Fahrenheit.

Furthermore, Ms. Liebeck did not sue McDonalds for millions of dollars. She asked for $20,000 to cover her medical expenses. McDonalds offered her $800. When it became apparent that she had to sue in order to have her medical bills and her daughter’s lost wages recovered, the jury deliberated for days before awarding $2.7 million in punitive damages, aimed at punishing McDonald’s. The case took years to resolve fully, and Ms. Liebeck ended up with around $600,000 when all was said and done.

The woman in New Jersey did not reveal how seriously she was burned, but both Stella Liebeck and Tori Spelling suffered 2nd and 3rd degree burns, and both women had to undergo skin grafts as part of their recovery. Burns are usually classified into 4 different degrees, each increasing in severity, though some sources claim there are more.

All three of these women suffered serious harm because of burns. But Ms. Liebeck also suffered from years of abuse in the press and open mockery before she died in 2004. However, her case may have paved the way for burn injury victims everywhere, by finally bringing to light just how serious and dangerous a burn is. People who do not know that “tort reform” is code for anti-victim language may not realize just how much damage the media caused in terms of public perception can learn more about it by reading the entire Retro Report, or by reviewing an HVO documentary called Hot Coffee to learn more about why we all need to speak up for victims.

A serious burn injury can be fatal, and seeking immediate medical attention is your best chance at recovering. If you suffered a burn because of someone else’s negligence, one of our experienced Baltimore personal injury lawyers may be able to help. Please contact Plaxen Adler Muncy, P.A. to find out more. We are proud to serve clients in Baltimore, Columbia and throughout Maryland.

Chronic Pain Is a Catastrophic Injury

The Link Between Burn Injuries and PTSD