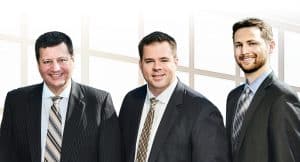 Plaxen Adler Muncy, P.A. is pleased to announce that attorney David A. Muncy has been made a partner at the firm. Over the last five years, David has proven himself an effective and aggressive attorney on behalf of his clients, and we are incredibly proud of the work he has done.

He also had the opportunity to experience different areas of practice. Along with plaintiff’s personal injury, which is what our firm does, he also worked with insurance defense firms and as a Rule 16 Public Defender in Baltimore City District Court, representing indigent clients.

David joined Plaxen Adler Muncy in 2012, and has proven himself a dedicated and effective attorney, trying hundreds of cases in Maryland’s District and Circuit Courts, the Social Security Administration, and the Maryland Workers’ Compensation Commission. His work on behalf of clients has earned him multiple accolades, including:

David is also an active member of the legal community as well. He serves on the Maryland Association for Justice Board of Governors, and is the current Chair of the Young Lawyer’s Division of the Howard County Bar Association. He is also a member of the American Associate for Justice; at the New Lawyer Division membership drive in Nashville recently, David signed up the most new members. (Ask him about his tee-shirt.)

We are all very proud of David, and excited to have him as a partner. We expect great things from him in the future.

Congratulations, David, on becoming a partner. You are certainly deserving of it.

David Muncy Honored by the Maryland Association for Justice

Posted in News, Our Firm