Even though the law in Maryland has changed to make it easier to show that a dog owner had a dangerous dog, the presumption that the dog was dangerous can still be rebutted by the owner if they say that the dog never attacked anyone before, or the dog has always been nice to everyone. It’s important to get an attorney to help find the evidence to prove that isn’t the case. 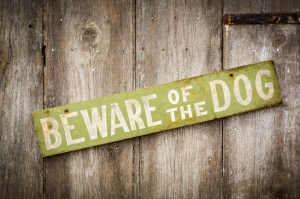 One of the best ways to do this is to get veterinary records, which often will note the aggressive tendencies of the dog either at the exams, or even what the owner reported to the vet that the dog had been doing. You can also talk to neighbors, dog groomers for the dog, anyone that came into contact with the dog that can give you a more objective indication of how the dog really is, as opposed to the owner telling you “Oh, it never bit anyone before.”

If you need to prove this, it can be difficult, but it’s vitally important that you hire an attorney because we know where to get this evidence to show that the dog had been dangerous before it attacked you. Plaxen Adler Muncy, P.A. has represented dog bite victims in Maryland for more than 35 years. If you were attacked by an animal, or sustained an injury because of someone else’s pet, please call 410-730-7737, or fill out our contact form.

For more information on David Muncy, please visit his bio.