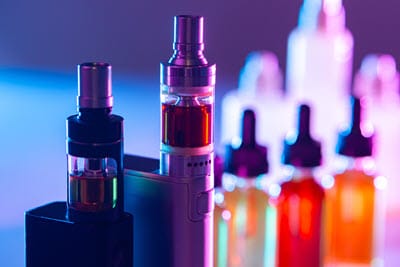 E-cigarette companies strategize different marketing tactics that will help their nicotine-filled products appeal to the youth. One marketing tactic that is commonly executed is the use of appealing flavors associated with their products. Some e-cigarette companies name their flavored vapes after delicious treats, such as Apple Crumb and Cinnamon Toast Crunch, to make them more appealing to younger crowds.

Last month, the FDA ordered three e-cigarette companies to stop selling most of their flavored products on the market. The agency’s regulators declared that the companies failed to supply sufficient evidence of how their products benefit adult smokers.

How have marketing tactics contributed to the youth vaping epidemic?

E-cigarette companies market their products to the youth in various ways. The companies create ads surrounded by themes that appeal to the youth, such as rebellion and independence. According to the Center for Disease Control and Prevention (CDC), ten million high school students and eight million middle school students reported that they had been exposed to e-cigarette ads in the year 2014.

What are some of the consequences if the FDA decides to ban e-cigarettes?

Harm reduction advocates propose that the illegal ban of e-cigarettes could lead to an era similar to the Prohibition years for e-cigarette users. Brooke Feldman, the co-founder of the Pennsylvania Harm Reduction Network, claims that these vaping products may be sold illegally and unregulated in the market. Feldman recommends limiting the youth’s access to the products and teaching the youth about the risks associated with the products instead.

The FDA rejected marketing applications for millions of vaping products based on the same criteria as the mandatory order. E-cigarette companies failed to provide substantial evidence that their products were beneficial for adult smokers. However, the agency delayed its decision on whether products from major e-cigarette companies like Juul and Vuse must be banned. The agency declared that it would need additional time to review the remaining applications.

You can trust us to protect your rights when you’ve been injured because of a defective product. Please call Plaxen Adler Muncy, P.A. at 410-730-7737 or complete our contact form to schedule a free consultation. We serve clients throughout the state of Maryland from multiple office locations.