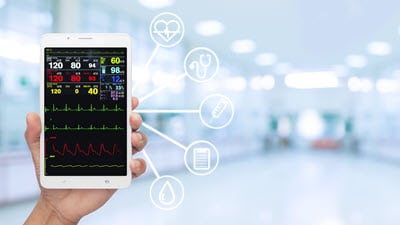 A National Highway Traffic Safety (NHTSA) study asserted that 20% of car crashes due to driver reported medical emergencies were caused by diabetic events and 11% were due to heart attacks.

These types of car crashes occur because a driver lost control of their car due to an incapacitating medical issue. In an effort to make driving safer, technology is being developed that will monitor medical conditions of drivers and provide warnings when an emergency is about to take place. Although it sounds like the plot of a futuristic science fiction movie, it is real and is happening now.

A 2017 CNBC news report indicated, ”In the future, warning signs, such as a change in heart rate, could lead a car to pull off the road and call 911.” Autonomous driving is intended to make driving safer and save lives. The precursor to this next level of medical monitoring, the Driver Monitoring System (DMS), is already on the market, monitoring for drowsy and distracted drivers.

What is a DMS?

According to an article on Aptiv, a DMS is a safety feature, which may also be called a Driver State Sensing System (DSS), that uses a camera mounted on the dashboard to track driver attentiveness. It tracks the driver’s attention and gives a warning if the driver seems drowsy or distracted.

The camera is fitted with infrared light emitting diodes (LED) so it can clearly view the driver’s face, even in the dark. Per Aptiv, “Advanced onboard software collects datapoints and creates an initial baseline of what the driver’s normal, attentive state looks like.” If the vehicle’s internal monitoring senses that the driver is inattentive, it will provide an auditory or visual warning, such as a beeping sound or lights on the dashboard. If the vehicle’s exterior sensors indicate a collision impending, the vehicle may brake to avoid the impending crash.

Only a few manufacturers, like BMW, Ford, GM, Tesla, and Subaru currently offer these monitoring systems. Consumer Reports' independent safety tests “uncovered some serious flaws and found that some of these systems don’t do enough to encourage safe driving. That is why only vehicles with GM’s Super Cruise and Ford’s BlueCruise performed well enough in our evaluations to qualify for additional points.” The “points” refer to Consumer Reports’ Overall Scores for vehicles, which help consumers choose cars to purchase.

This next level monitoring is minimally available overseas, and still in testing and development in the US. Consumer Reports notes that early versions of this technology are currently available in Europe. The Volkswagen Arteon sedan, only in Europe, includes the Emergency Assist 2.0 feature, which turns on flashers and pulls over to the side of the road if a driver is unresponsive.

According to the automaker, if the car senses that a driver is not using the accelerator, brake, or steering wheel, it will first try to awaken a driver by sounding alarms and tapping the brakes to “jolt” the driver into awareness. If the driver still doesn’t respond, it will automatically steer itself to the lane furthest from traffic on a multilane road and bring the vehicle to a stop.

Mazda will be debuting its Co-Pilot system on new vehicles this year in Japan only. The system is supposed to continually monitor the driver’s performance and intervene and assist if the driver loses consciousness.

Toyota and Ford are independently researching how to combine health sensors and autonomous driving features to enable vehicles to pull off the road and call 911 when a driver is unresponsive.

Most vehicles will not be equipped with this innovative technology for many years. Drivers must self-monitor and do their best to stay safe until this unique safety feature emerges.

What if I’m involved in an accident due to a sudden medical emergency? Who is responsible?

Liability in car accidents with medical emergencies is often hard to decipher. Many states, including Maryland, recognize the Sudden Medical Emergency defense. In these instances, drivers who suffer a medical emergency are not liable for the car crash.

But the emergency must be:

For example, if someone suffers a heart attack after a collision they cause, they are liable for any damages they cause since the heart attack did not preclude the collision. In other cases, if a driver misses medication prescribed for medical conditions that may lead to inability to drive, they may still be held responsible for an accident. Some medical conditions that may lead to impaired driving include diabetes, seizures, heart problems, and eyesight problems.

If you or a loved one are in an accident due to a medical emergency on the road, you will need an experienced car accident attorney on your side. For more than 35 years, Plaxen Adler Muncy, PA is your premier personal injury law firm serving clients throughout the state of Maryland. Call us today at 410-730-7737, or submit our contact form to schedule a free consultation.